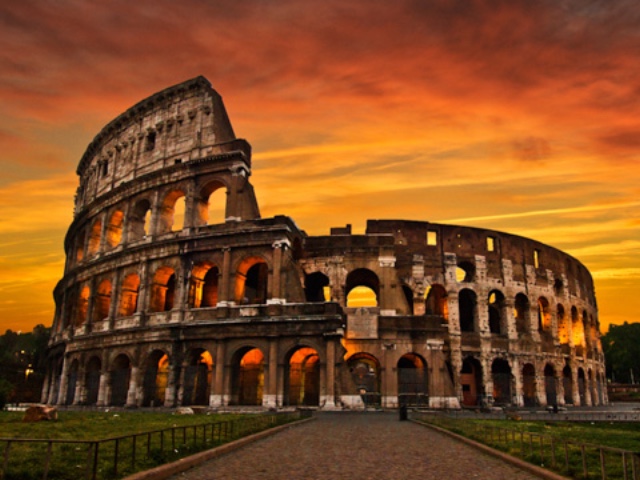 The Fleming Foundation is pleased to announce its first convivial program in Europe. The program consists of 7 nights in Rome at the beautiful Grand Hotel del Gianicolo. The theme of the trip will be “the grandeur that was Rome,” specifically, the height of the Roman Empire from Nero to Marcus Aurelius. This was, according to Gibbon, the happiest age of the world in which to live, and the monuments of literature, architecture, and art in Rome itself tend to back up Gibbon’s glowing sentences.

Most of the most impressive ancient monuments in Rome date from this period: Nero’s Golden House, the Palace of Domitian on the palatine, the Flavian Amphitheater (known as the Colosseum), the Trajan’s Column and Markets, the Pantheon….

It was also a distinctive age in Roman literature, marked by Tacitus, the great Machiavellian historian, Seneca, the playwright and philosopher who served as Nero’s prime minister, the savage satirist Juvenal, whose poems were translated and imitated by John Dryden and Dr. Johnson, Petronius Arbiter, master hedonist, companion of Nero’s revels, and author of the wickedest send-up of imperial decadence, The Satyricon, to say nothing of Statius (Dante’s guide to Purgatory), Martial, Trajan’s advisor Pliny, and the philosopher-emperor Marcus Aurelius.

In looking at the careers of most of these writers, we confront a dilemma familiar to us in our own time: How is it possible to lead a decent republican life in a period of imperial despotism? The Roman answer, typically, emphasized acceptance of personal responsibility and patriotic duty. Sometimes—as in the case of Seneca and Petronius—it meant death, but it could also mean the chance to be a good citizen.

This program is not really a school—much less an academic conference. There will be several lectures and some recommended readings, but most of the time will be spent exploring Rome, not just the ancient fora and temples, but also Medieval and Renaissance churches and palazzi.

Those who have attended my Winter programs in Rome, may remember the lovely location of the hotel, high up on the Gianiculan Hill, a short walk from the nightlife and shopping of Trastevere but out of the heat and crowds. If you think that you may not be up to a great deal of walking, you are not alone, but Rome has good public transport: an efficient bus system, taxis, trams, and over a long period of time, I have been mapping out the best bus routes and locations of taxi stands.

The price for for seven nights with breakfast at the Grand Hotel del Gianicolo, three group meals, a Roma Pass that gives free and reduced entry to many monuments and museums as well as several days of free bus travel, and as much enlightening gabble and gossip about the ancient Romans that mortal flesh can bear—will be $2400 per single and $3400 per double. These are Early Bird Rates which will go up $150 on August 15 and another $150 on September 1st.

Non vedo l’ora di rivisitare Roma. I cannot wait to go back to Rome. I once had an employee who told me he had been to Rome twice, once for three days and once for a week, and he felt he knew the place. I guess I am pretty slow because after 27 years, I am still as excited as a kid, when the airport taxi comes near to the Aurelian Wall. If you have the time and can arrive early, do not hesitate to ask for advice, information, or assistance.

The morning after we finish up in Rome, a bus will take the happy few who are left to Perugia one of the loveliest smaller cities in central Italy. We are booking rooms in Perugia, where I stayed some years ago, right in the historic center.

Perugia is the home of the so-called Umbrian School of painting and contains some of the best paintings of Perugino and Pinturicchio, among many others. The Sala di Udienza del Collegio di Cambio (the meeting room of the bankers’ guild), painted by Perugino, is among the finest Renaissance rooms in Italy. Perugia also has fine museums, splendid churches, a magnificent fountain, and an arch of Augustus.

But Perugia is not just a “city of art.” Like the Tuscan cities to the north, with whom she contended for preeminence, Perugia was a place of conflict, fighting wars with Arezzo, Siena, and the papacy, but reserving its most violent episodes for domestic disturbances. Accounts of the Baglioni clan and its wars with rivals reads like the bloody accounts of Texas feuding, and yet the Baglioni were accounted the handsomest noblest men in Renaissance Italy, and they appear to have inspired the painter Raphael.

The feuding and fighting was repressed when the city was taken by an even tougher despot, Alessadro Farnese, aka Pope Paul III but earlier known as “the Pope’s brother-in-law" because of his sister’s friendship with Rodrigo Borgia, Alexander VI.

All of Umbria and Le Marche were incorporated in the Papal State, losing their liberties and learning to live as subjects of an empire. They too had to learn the lessons learned earlier by Seneca and Pliny, and they continued to be taught these harsh lessons by the Piedmontese conquerors of Rome and by the corrupt despotism of the modern Italian “democracy.”

We could spend the whole five days just in Perugia, but we have planned a bus excursion to Assisi, home not only to the Basilica of Saint Francis but also to a Roman amphitheater, and another to Gubbio, perhaps the most beautiful Medieval city in Italy. For TV fans, Gubbio is also the scene of the long-running series “Don Matteo” in which former spaghetti Western star, Terence Hill, solves at least a crime a week, making Gubbio the “Cabot Cove” of Italy.

The price for the additional stay in Umbria, which includes transportation from Rome to Perugia, five nights lodging and breakfasts, three group dinners, transportation to Gubio and Assisi, is $1,600 per single and $2,600 per double.

On the way from Rome to Perugia, we’ll stop to explore Todi. The current plan has us ending on the evening of the 19th. Some of us will stay on in Umbria or take a train to Arezzo or Florence. Those wishing to return to the States by way of Rome can either take a bus directly from Perugia to Fiumicino Airport or take a train to Stazione Termini and change for the airport train. If your schedule requires an overnight in Rome, you might consider staying near the airport in Ostia Antica, where some hotels have airport shuttles.

We look forward to seeing you in Italy..