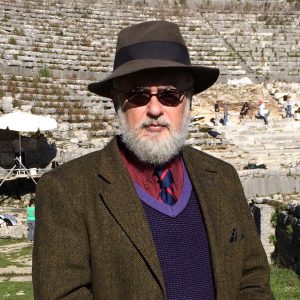 Thomas Fleming is president of the Fleming Foundation.

From 1984 to  2015  he was editor of Chronicles: a Magazine of American Culture, published by The Rockford Institute, where he served as president from 1997-2014.

He is the author of:

The Colometry of Aeschylus
Socialism
Montenegro: The Divided Land
The Morality of Everyday Life
The Politics of Human Nature,

He is co-author  (with Paul Gottfried) of The Conservative Movement
and editor of Immigration and the American Identity.

Dr. Fleming received a B.A. in Greek and French from the College of Charleston (South Carolina) and a Ph.D. in Classics from the University of North Carolina (Chapel Hill) in 1973.

His writings on politics and culture have appeared in many newspapers--The Independent on Sunday (London), The Washington Post, Chicago Tribune, USA Today, Chicago Sun-Times, Los Angeles Times, St. Louis Post Dispatch, and he wrote a regular column for the online edition of The London Daily Mail.

His essays and reviews have been published in such magazines and journals as The Spectator (London), National Review, Society, Texas Review, Chesterton Review, Political Science Quarterly, Telos and Criticon (Germany), and in published volumes:  Why the South Will Survive, The New Right Papers and The Encyclopedia of Southern Culture.  He has also published articles and reviews on classical subjects in Greek, Roman, and Byzantine Studies, Classical Journal, Classical Bulletin, Studi Italiani di Filologia, and Quaderni Urbinati, as well as verse in The New Oxford Review, Crosscurrents, The Formalist, and Plains Poetry.

His teaching experience includes posts at Chapel Hill, Miami University of Ohio, Shaw University, the College of Charleston, and the University of Colorado (Boulder).  He also served as headmaster of The Archibald Rutledge Academy in McClellanville, SC, and has frequently advised the U.S. Department of Education.

His television appearances include PBS series "Making Sense of the Sixties," PBS documentary on America as universal nation, "Pozner & Donahue," NBC Today Show, interviews on Yugoslav national television and radio networks, BBC television and radio, in addition to radio talk shows and interviews throughout the U.S.  He is also a frequent speaker and lecturer at universities and conferences in Europe and the U.S., including the Pontifical Council on the Family (Rio 1997) and the Russian Academy of Science (Moscow 1996).He is the recipient of a 1995 H.L. Mencken Award for best essay and the 1988 American Values Award.