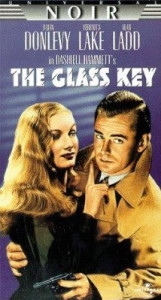 February’s book selection is a bit different from previous choices:  The Glass Key, a hardboiled mystery novel by Dashiel Hammett.  Hammet is best known for The Maltese Falcon and The Thin Man, both of which were turned into popular films, but the author’s personal favorite was The Glass Key, a very readable novel that takes up themes of friendship and loyalty, deception and betrayal.  It was made into two American films.  An early version starring George Raft and a later and better film with Alan Ladd and Veronica Lake.  The great Japanese director, Akira Kurosawa, so liked this movie that it inspired him to make one of his most popular films, Yojimbo, which in turned inspired Sergio Leone to make his first Clint Eastwood spaghetti western, A Fistful of Dollars.  Moviegoers will have the chance to defend their favorite version, though fans of Sergio Leone are going to have a tough time.

The most available text of The Glass Key is in the Library of America edition of Dashiel Hammett .  Less expensive editions are available at Amazon.  ABE is selling copies of the Vintage paperback edition for $3.45, shipping included.  There is also an overpriced Kindle edition, which may be more convenient for some readers.

Boethius Book Club℗ is a Production of the Fleming Foundation. Copyright 2016. All Rights are Reserved.

Homer, His Age, and His Legacy - Summer Symposium 2020 Lectures - Now available from the TFF Store.