On Thursday, I  took a break from slogging on this blog--does that make me a Slogger Trogger?-- and we drove to Heraclea Minoa, a colony projected (6th century?) by the colonial city of Selinus as a frontier defense against the encroaching forces of the more powerful Akragas (Agrigento).  In time, Akragas got the upper hand and took the town, only to lose it in the disastrous struggle with Carthage at the end of the Fifth Century.

Sikeliot Greeks, led by the tyrants of Syracuse and Akragas,  had defeated Carthage decisively in 480, but their incessant conflicts among themselves, aggravated by Athens’ completely unjustified aggression against Syracuse and its allies, made them vulnerable to the nasty Phoenicians.  If anyone tries to tell you that the Carthaginians did not sacrifice their children in times of crisis, be aware that you are talking with an enemy, not just someone who has read the wrong books, but someone who exults in finding out that his people are wicked and other people are good.  (I do cut slack to students of the Phoenicians, who have come to identify with the enemy.)

Greek Sicily was, in fact, more divided than Medieval Italy, where the Church and Empire were uniting as well as dividing forces.  Though modern historians do their best to cover up the reality, much of the conflict was fundamentally ethnic, as Dorian colonies strove with the early settlement from Ionian Chalkis.  This is dangerously simplified, since Dorian cities quarreled among themselves and sometimes made alliances with Ionian towns, but the general pattern is clear in the wars between Ionian Athens and the Dorian alliance of Sparta and Corinth—the mother-city of Syracuse.   The situation is a bit like that of the colonies planted in North America by France, Spain, Holland, and England.  No sooner did the Anglo-Americans colonies (apart from Canada) liberate themselves from Britain than they took to quarreling among themselves.  During a time of war, some traitors even took the side of aggressive Mexico on the high moral grounds that Southern states would benefit.

The history of the Western Greeks anticipates in many ways the history of the Americas.  Sicily was a kind of no-man’s land, inhabited by Sicans, a mysterious race that had been somewhat marginalized by Italian settlers, the Sikels.  From the bits of their language we have and from what archeologists have revealed about their culture, the Sikels appear to have been related to the sturdy ethnic mix of Central Italy from which the Oscan, Sabellian, Latin—and, therefore, Roman—peoples emerged.  Unlike the Greeks, these Italians were not a brilliant or creative race, to be sure, but they were far from savages and proved themselves capable of adapting—not without some natural resentments—to the Greek way of life.  By the time Cicero was visiting the island (in the early First Century BC), gathering materials for his case against Verres, the Sikeliotes—apart from the Phoenician Carthaginians—were a single people.

I wish it were not so, but peace is conducive to sloth and competition and strife are the progenitors of civilization.  I have argued this point so often, it hardly bears repeating, but the two most creative periods in our history—archaic and classical Greece and Medieval and Renaissance Italy—were times not just of war but of conflict even at the neighborhood level….  On the other hand, the same creative Eris that drove Pisa to contend with Lucca, Genova, and Florence, Genova with Venice, Milan with Venice and Florence...made Italians easy prey for the hordes of German and French berserkers who were forever pouring over the Alps in search of wine, women, and pizza.

On the other hand, where did it get the Germans?  Their world is dead.  They have entirely lost the faith of Luther and Calvin, their literature is smelly self-hatred, their music runs the gamut from Stockhausen to Turkish rap (number 1 on the pop charts).  In the long run it is not just individuals who are all dead, but nations and cultures--except, of course, for the Greeks, Italians, and any other people who lifted their snouts up from the trough long enough to see the sky.

The drive, which is just under 25 miles, takes something like 45 minutes.  I am figuring a Sicilian driving average, of one kilometer per minute.  It is not that Sicilians are slow drivers—on the contrary, they take fantastic risks and pass in one-lane construction zones.  As in Naples, when the light turns red, you can count on five to ten more cars going through.  Unlike Neapolitan drivers, though, Sicilians maintain a steady speed and do not suddenly drop from 90 mph to 20.  They are also extremely attentive—more attentive than Californians.  So, while they take enormous risks, they take them with skill.

No, the problem is endless road construction and disintegrating infrastructure.  Always keep in mind two facts:  Sicily pours more yards of concrete per capita than virtually any region in the world, and the profits end up in the pockets of the close-knit families who are behind the  scenes of everything on the island.  Along the way to Heraclea Minoa, we passed what seemed to be a beautiful town on a hill, Siculiana. Some years ago, their town council had to be dissolved because it was completely under the control of certain prominent families, one of them named Caruana, which happens to be the name of the Winnebago County sheriff.  No connection of course.  Rockford has always been completely clean—ask the police.

The road rapidly clears up after Siciliana, and when we leave SS (Strada Statale or Government Road) 115, we are in a verdant zone, with the sea to the South and, to the North, the beautiful valley of the Platani.  The ancient city itself, located on a brow overlooking the sea, is an entrancing spot, and the senses are glutted by the green forested hills and blue sea, perfumed by flowers, and hushed by the distant sighing of the waves.  It would be magical, if the wretched little government archeologists and culture bureaucrats had not erected full-color placards advertising the beauties of the ruins or covered the theater and houses with ugly plexiglass and aluminum protective coverings that recall proletarian neighborhoods in Eastern Europe, Mexico, and Turkey.  Is this ancient Sicily or Novi Beograd? 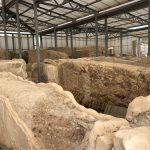 Yes, the sandstone is so very porous that the seats of the theater have been worn into shapes that look like melting marshmallows.  And, yes, they must preserve the past if they are to study it.  Nonetheless, this ruthless reduction of time-mellowed ruins into a factory for mechanical research reminds me what I have against archeology.

Years ago, my friend Thomas Molnar used to protest against art restoration and not just the incredible devastation wrought by the criminal lunatics who permanently ruined the Last Supper.  It is one thing to do a little cleaning or a few touch-ups, but quite another to attempt to wipe out 500 years of the painting’s existence.  The attempt to defy the past is evidence of a fundamentally heretical theory and a thoroughly degraded mind-set.  It assumes technology can remedy not just defects and errors but time itself.  This further assumes that the archeologist or restorer is engaged in work that is basically superior to someone who merely enjoys the beauties that time has spared, when in fact they are small-minded boors who can only rarely write a coherent sentence.  I exempt, it goes without saying, all friends and former colleagues, who made a career in archeology.

Yes, there have been great archeologists with comprehensive views and cultivated sensibilities, but, there also have been statesmen who put their country’s welfare above their own greed and vanity, poets who wrote from the heart and not for government grants or academic promotion.

I digress.  Or do I?  Yes, I would gladly go back to visit the site and grit my teeth against the professional vandalism.  It’s a bit like going to a concert for the Mozart symphony and first sitting through Rite of Spring.