A Christmas Story from Anterus Smith, as told to Chad Rayson, Part I 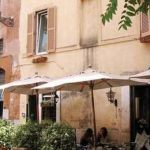 We were sitting outdoors, one warm afternoon in late December, in a cafe near the Piazza della Scala in Trastevere, a stone’s throw from the ancient pharmacy.  If you know Rome at all, you will be able to visualize the scene:  Romans wrapped up like Arctic travelers, though the temperature is above 60, the space heaters blazing hot enough to jack up the heat in Hell, and everyone drinking a little wine and talking much more than they are drinking.

My Roman friends took the clement weather as no more than their due.  Whenever the sun doesn’t shine, they feel cheated of what nature owes them as surely as it owes them the air that they breathe.  We foreigners, not so lucky, were basking in the sun and talking about putting on spring clothes, when out of nowhere the tall Inglese, who looked more like a Norwegian, started talking about English stories set in Italy.  We soon disposed of E.M. Forster, Henry James (he hardly counts as an American), and Magdalen Nabb.  The Inglese brought up George Gissing’s On the Shores of the Ionian Sea, and from the impoverished author of New Grub Street, it was an easy descent to the misery of Frederick Rolfe, aka Baron Corvo, and his made-up folktales, Stories Toto Told Me.

A younger Italian observed that the conversation was beginning to resemble one of his own obsessive wanderings through Wikipedia, in which he starts by looking for Domenico Modugno’s birth date and ends up with Evelyn Waugh by way of Harold Acton.  The stretch from Modugno to Waugh is not all that far, but I’ve only looked at Wikipedia once, and that was too much.  How could so many errors by committed by so many in such a limited space as one of their entries?  The conversation languished, and the Inglese, who came from Yorkshire, told the Italians they did not know what a real Christmas was.

“I mean to say, this is all very pleasant, and I’m grateful to be here today, but, really, you know, for Christmas one expects the nip in the air, a roaring fire, and ideally at least a little snow.  I’ve lived in Rome for several years now, and I rather miss a Yorkshire Christmas.”

I decided to take umbrage on behalf of the Italians.  Why not?  There was nothing else to do, apart from ordering another bottle of Frascati.

“Listen, my friend,” I told the Englishman, “You may look like the 'Viking' in the movie they made in this neighborhood, but you have no idea of what winter is, really.”

The Brit made a pretense of righteous indignation:

“I thought you came here from San Francisco and before that Alabama.  I‘ve never heard all that much about the rigors of the Mobile winter, or perhaps I haven’t read the right books.”

“There are many things you people don’t know about us red-blooded Americans.  I am a bona fide NorthWoodsman.  I can build a fire in the rain to cook the trout that I caught, and I am entitled to brag about Paul Bunyon, Babe the blue ox, and I have the blood of the French voyageurs.  Settle back, and I’ll tell you a tale of the frozen north, more chilling than the “Cremation of Sam McGee.”

My father grew up on Pecker Island, the first of the Mission Islands that trail off the tip of the Chequamegon Peninsula into the Big Lake, the greatest and coldest of North America’s freshwater seas.  In those days, as the Great War bled away to its end, the Island was not a vacation community, though in 1898 a resort had been made out of the old Protestant mission.  Even the island’s “capitol,” Cadotte, was a dilapidated settlement, home to a few straggling families of fishermen and lumberjacks.  My father used to say that it was the last time of the American innocence, before electricity and radio had made all men brothers in buying and selling, and the few families on the island might just as well have been living in the Yukon, for all they knew of the outside world.  As a matter of fact, Madeline Island’s surplus dog population was being rounded up and sold as sled dogs in the Yukon.  In good weather the ferry ran back and forth to Chequamegon, which was not the cradle of art and society it has since become, but there were whole weeks when the islanders were as completely cut off as their grandparents had been.

If anyone had cared about news of the outside world, their curiosity would hardly have been satisfied.  There were no newspapers, except when someone brought a coffee-stained handful of newsprint, often a week old from the mainland.  If you can believe the story my father tells, his family had no books, apart from a tattered speller used as a doorstop and an old copy of the Vulgate bible owned by his uncle James.

James was my grandfather John’s younger brother, and he and my grandfather owned a fishing boat together.  Those were the last years when the lake trout and white fish were still so plentiful, they practically broke the nets as they were being hauled in.  James and John they were, “the sons of Zebedee,” as the family liked to say, plying the trade of their namesakes there in the Mission Islands.

Uncle Jim was the smart one in the family.  Although he was just as strong as my grandfather and as great a hellion, he had from his earliest years shown a strong attachment for the Catholic faith.  The church had burned down in 1905, but the Catholic community, descendants of the original Ojibwa inhabitants and French voyageurs, scraped along, sometimes reduced to the expedient of attending the Congregational church where the Bible was read, though God only knows (my grandmother said) what those heathen Puritans made out of it.

Since we lived inconveniently far out of Cadotte, it was the rare priest who came to our house, but one of them quickly picked Jim out for his quickness and had him sent him to the seminary in Zenith to study for the priesthood, until his radical political views got him kicked out.  This had been about 1913.  James always was first in the class in Latin and systematics, but he was unreliable.   Asked to deliver his first trial sermon, he had picked the text comparing a rich man’s chance of entering the kingdom of heaven with a camel trying to pass through the eye of a needle.  His point might have escaped the bishop, who had come for the day, if James had not added a few choice remarks on the capitalists’ war in Europe.  In 1915, his remarks might have passed for piety.  By 1917, as President Wilson was making up his mind to send troops to France, they sounded like treason.

In Chequamegon, they called James the Wobbly priest, because he was forever talking about the IWW in the same tone the rest of us reserved for church, though some said it was because he was often unsteady on his legs after a night of carousing with his union buddies.  He had spent several months organizing for the union among the dock workers and merchant seamen in the Twin Harbors, and even spent some time working on an ore boat.  He always spoke of Big Bill Haywood, the Wobbly leader, as if he had more goodness than saints Peter and Paul combined.

My grandmother, who treated James more like an adored younger brother than like a brother-in-law, did not share his high opinion of the Wobblies.  “Industrial Workers of the World,” she would snort, “More like I Won’t Work is what those letters stand for.”  She had picked up something of an Irish way of talking from her husband and brother-in-law, whose father had come from Kerry by way of the Maritimes, even though she was an island girl.  I have seen a wedding photography of my great-grandmother Evangeline, and she was a very beautiful lady.  She had been named  by a priest from Quebec who had read at least one book in English.   She always said she was pure French, though her coarse black hair and permanent tan betrayed the fact that like most people on the island, she was more Indian than French.  Sometimes she admitted the fact, but only to claim that she was descended from the daughter of Chief White Crane, the Madeline who was the patron saint, so to speak, of our island.

Evangeline had been sent to school with the nuns, and she did her best to make everyone in the family a good Catholic, though they often did not attend a mass for months at a time.  On Sundays, if there was no priest on the island, she made James recite some Latin prayers he had learned by heart--not just the Pater Noster and Ave Maria, but also the Confiteor, the Credo, and the beautiful Salve Regina.  He knew many of the psalms, and could remember Gospel passages word for word in Latin.  After the prayers, James would translate stories from the Vulgate.  During the winter, when according to my father they were often snowbound for days at a time, Uncle Jim would retell some of his favorite Bible stories, though if he had been drinking, the locale often shifted back and forth between the Holy Land and northern Wisconsin.

“You see, the great lake out there (pointing out toward the cold-steel blue Big Lake) is just like the Sea of Tiberias, and the Chequamegon Peninsula, with its rolling hills, chopped up by white rock outcroppings and hedged in by apple orchards, might be Galilee, where Jesus walked and preached.”

Years later during the Second War, when my father was a merchant seaman in the Mediterranean, he spent several weeks in Palestine.

“I’ll be damned if Uncle Jim wasn’t right,” he declared,  “but then, he was, as we all knew, a learned man, the best student--not just in Chequamegon but on the whole peninsula--and he might have made something of himself if had shaken his two curses--the curse of drink and the curse of politics.”

Part One.  Be sure to read Part Two tomorrow, and part Three the next day.  Who knows how this will end?

The Fleming Foundation > Uncategorized > A Christmas Story from Anterus Smith, as told to Chad Rayson, Part I