Hellas: A Crisis That Is Absolutely Moral By Nikos Hidiroglou 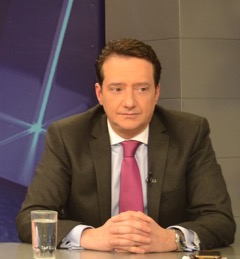 The nihilists, cosmopolitans and atheist bureaucrats (some of them called ironically “Christian Democrats”) that run European affairs have actually decided to destroy everything on the continent that gave birth to our civilization.  And they are ruining Hellas, the timeless source of light.  Since WWII they have subjugated, step by step, its political system, and now they are enslaving the country financially.  Hellas is sinking deeply into debt. Well, there are no political expectations right now for modern Hellenes.  Their choices are indeed limited. The urban political elite of the country is demonstrating in every chance it gets, the strange syndrome of “Germanophilia.”  But, this obsession could end in catastrophe, in the event that the US “clashes” with Germany… It’s up to Donald Trump, really.

Hellas’ government, made up of left wing radicals and amoralists of the right, is just marking time in power, taking care of the enrichment of its nomenclatura. T he neo-communist & internationalist Prime Minister, Alexis Tsipras—the man who opened the gates to the immigrants taking Europe by storm—is trying to reach out to Donald Trump and to establish a line of communication with his team.  Needless to say his ally Panos Kammenos, the minister of national defense, is trying the same ploy.  The reason is that their government—regarded as a joke by any rational political element in Europe—can no longer bear the German pressure for the absolutely necessary reforms in the Greek economy.   These reforms—necessary though they are—would, however, enrages the government’s allies in the public sector.   At the same time, young leftist—members of the ruling left wing party—are demonstrating in Athens against Trump’s immigration ban.  Is this hypocrisy or— if we can be more cynical—simply politics.?

Greece cannot be described as just a spot on the southeastern part of Europe.   For all its current difficulties, Greece still has a geopolitical significance that is magnified by the country’s history and tradition that continue to add a great deal to its weight in the international arena.  However, its communist government appears to be taking pleasure in destroying the country’s image.  But patriotism holds no attraction for the Greek government and its supporters.  This is the (dark) moral side of the Greek crisis. The prevalence of the “Gauche caviar”—in America they used to be known as limousine liberals)— and their “progressive” and subversive agendas have undermined Greece’s national and Orthodox Christian ideals and, in turn, the country’s social cohesion. Today’s Greek society is unable to deal morally with the crisis and turns to the radicals of the left and the extreme right.  And, predictably, things only get worse.

Since the time of the Marshall Plan, Greek elites decided to leave everything in the hands of others.  Dependence on the structures of the European/Atlantic alliance was constantly growing, though the conflict in Cyprus during the ‘50s and the 60s, as well as the expulsion of Greeks from Constantinople, were harsh reminders that at some point the government in Athens was going to have to carry out its responsibilities. The Turkish invasion in Cyprus in 1974 shouldn’t have caught the Greeks by surprise.  It did though. Since then, democracy was consolidated, and Hellas made some advances into the modern world.. But it developed on the wrong basis.   Corruption and profiteering were rife, while the (mainly socialist) governments never had either the will or the instruments to monitor public spending.  Nepotism was and still is the rule in Greece, and it is depriving our society of viable solutions.  And things get worse day by day, since the crisis started in 2009.  By any imaginable scenario, prospects are grim.  Although Hellas was obviously unprepared for the euro, it adopted the EU’s currency, with a terrible cost for the economy and the society. However, a Grexit at this point could prove to be catastrophic for the country.

In a few years time, Greece, if its course is not reversed, could turn out to be the “destruction 101” course in American universities.  The Greek elites have refused to recognize that the economic and political crisis is fundamentally a moral crisis.  Until they confront reality, they will only continue to drive their country on the inevitable course of its destruction.

The Fleming Foundation > Uncategorized > Hellas: A Crisis That Is Absolutely Moral By Nikos Hidiroglou