We had decided to stay in a little hotel in the center, the place in which we had spent a week during our first trip to Italy, 30 years ago.  I had been foolishly attracted to the Alberto Cesàri, when I discovered that Stendahl had passed a good part of his sojourn in Rome in this very place.  It was and is an unpretentious place, though about five years ago they added a rooftop bar and breakfast room.  In 1988 most of the guests were tourists like us, but this time we were the only Americans, except for a Fox Radio News director/presenter, who introduced himself as “working for a radio news program.  When I pried out the name of the network from him (his reticence had given the game away), he hastened to assure us his network was anything but right wing.  I can’t blame him.  He was a pretty normal American doing his job over the years, only to realize that making any effort to report facts puts him in company with Julius Streicher.

Apart from us three Americans and a few rude Germans, the guests were Italian.  Italians are not the quietest or reserved travelers, but compared with Americans they seem almost British, except they are too friendly.

If anyone is planning to go to Rome, I heartily recommend the Cesari, especially for what the Italians call the ratio of prezzo/qualità.  It is quite modest, very quiet, and the staff could not be more helpful.

Usually I stay a bit away from the the center—in Trastevere or up on the Gianicolo, or, last year, near Santa Maria Maggiore—where the hotels are both old-fashioned and convenient to the Stazione Termini.  The Cesari, however,  is around the corner from the Piazza di Pietra, which is, if not a stone’s throw, at least a discus throw from the Pantheon, which was our first stop in an entirely touristic itinerary that took us to the P. Navona, Campo dei Fiori, and, after a pranzo of pasta near the Chisotro di Bramante, to the Via dei Fori Imperiali, down which we walked without entering the Forum Romanum.

The next we walked up to the Quirinale, where a special exhibit on Ovid was being held in the Scuderie (stables) of the papal government, taken over in turn by the monarchy and the current Jacobin state of Italy.  The actual objects on display—books and mss. Of Ovid, statues and frescoes on mythological themes, and a variety of Renaissance and baroque paintings—were well worth the walk, though the pretentious catalogue and endlessly showing film represented the curator’s puerile view of Ovid, Augustus, and human history in general.  In this chump’s interpretation, the main problem appeared to be Augustus’ puritanism and piety toward the gods of Rome.  The Princeps therefore perceived Ovid’s witty takes on Jupiter’s amours as an attack on the regime—as if this sort of erotic spin on the ancient tales had not become old hat by Ovid’s time.  Little mention of the allegation that Ovid had acted as a go-between in one of the younger Julia’s affairs.  It is alas too a truism that much if not most historical analysis comes down to reading our own time into another.  Without this temporal chauvinism, there would be no point, these days, to academic history departments.

After opening the morning with Ovid, we ended up on the Via Nazionale and remembered a pizza joint on the Via Genova.  It looked unpromising that day and we made the mistake of going next door.  With a bottle of Frascati, it was a least better than sushi at O’Hare.  Rome wasn’t built—or eaten—in a day.  Most of the trattorie near the hotel seemed to have declined over the past 25 years, so I asked the nice girl at the desk, who recommended the Taverna Antonia, on the quiet Via della Colonna Antonina.  As moderately priced restaurants in the centro storico go, it was excellent. I skipped the pasta and had marinated alici (anchovies) followed by abacchio of lamb with grappa for dessert.  My “companion” (as discrete food reviewers like to say) had a carciofo all romana and the same second.  Two days later we returned for a fish dinner—I had Bronzino after some excellent tentacoli di polipo.  My wife started with mussels cooked with fresh ginger and thyme—excellent—and— baccalà in a tomato sauce with raisins and pignoli.  Perhaps the chef was Sicilian.

I always enjoy Rome, but it takes several days to get back my Rome legs and my Rome mind, and by then, typically, we are headed off.  This is a mistake.  New Yorkers like to say the the old adage about their city is wrong.  It is not at all a nice place to visit—too many people, too much congestion, too much hustle—but for the right people it can be a good place to live.  I take their word for it, but in the case of Rome, the truth is immediately apparent.  After several weeks, the visitor finds ways of avoiding the crowds and carves out a little social network of favorite trattorie and groceries where he is recognized.  By the end of the month, one is almost at home. 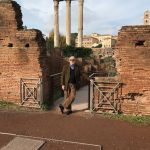 We did spend an entire morning in the Forum and on the Palatine and managed to visit both the “house of Livia” and the “house of Augustus.”  Both visits were worth the time, but the son et lumière shows were appalling.  I keep forgetting how stupid the new millennium really is, how incapable people are of seeing with their eyes without hearing a narrative and seeing electronic reconstructions.  Even in Rome, wherever government or academics have any say in the matter, there is no reality but virtual reality.

One more reason to escape to Sicily.