Time for My Second Presidential Campaign 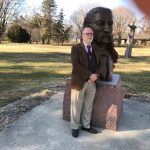 Many years ago, to test the gullibility of colleagues and readers, I started the rumor that I was being considered as a possible Presidential candidate.  No one I know could be that gullible?  Think again, one prominent libertarian-leaning conservative called to find out if it was true.  Obviously, he was sounding me out for a cabinet appointment.

A few years later, I printed a piece, which I explicitly attributed to a dream, in which I was being dragged to the Hague to be put on trial for complicity in Slobodan Milosevic's genocidal policies in Kosovo.  Again, who would believe it?  My then boss, to begin with.  "Is this true?" he asked with obvious joy at the possibility of getting rid of an irritant.  The one thing one can learn well from rabbis is to answer one question with another:  "What do you think?" I asked.  "I think it's a great fund-raising opportunity."

I have always found the idea of running for any office preposterous, and, like most good Americans--note the adjective--my first response on meeting a politician is to distrust his integrity and despise his ambition.  When I was a junior in high school, someone nominated me for Junior Class Treasurer (or something).  I told the faculty advisor to student government that I utterly rejected the honor, but she told me I had no choice except to run.  So, on the day the candidates made speeches, I went up on the stage and told my fellow-students what, surely, most of them knew already, that student government was a farce, that the officers had no power whatsoever, that in general the people who sought offices in student government were just sucking up to the teachers.  I concluded, "Please do not vote for me!"  Curiously, I came within a few votes of winning.

I was famous in Mt Pleasant, South Carolina,  for about a year, and when some months later, after deciding to skip my senior year, I was a freshman in college, more than one of student wanted to know was I the guy who ran for office by telling people not to vote for him.  Don't tell me I haven't achieved anything in 75 inglorious years!

So now, I have decided I must have been wrong.  Bush II, Obama, and Biden have convinced me that in America, anyone, Hell, anything can become President, so I  am contemplating throwing my hat in the ring, and, assuming Biden will be around to run for a second term,  I have already come up with a campaign slogan.  "Give Youth a Chance--Vote for the Younger Man."

The Fleming Foundation > Feature > Time for My Second Presidential Campaign