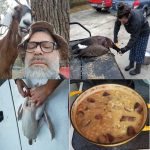 I have a chronic reluctance to get up before dawn to perch myself in a tree-stand at first light in the middle of deer season, but, as I faced  the final week of hunting,  my sloth yielded to an insatiable venison-jones which drove me, regardless of moon phase or feeding schedule, temperature or precipitation, to go out early every morning of that final week, shivering in wind and rain, before work hoping for the arrival of a doe into my kill zone.

Hunters are allowed two bucks and ten does per season in Georgia, the second of two males allocated must sport over four points; the latter is a somewhat rare sight near the end of the season here along the intercoastal waterway where I live and hunt. The mature bucks are more likely seen at the beginning of the season or during the rut when they lose their minds mating and pursue a doe unwittingly into hunting areas where a bolt from my crossbow caught a young three-point the first day of the season.

I usually use a crossbow, but, after moving my tree stand after many uneventful discouraging days, I fell back into  into midseason sloth and positioned myself farther from houses and roads.  After clearing a bit of brush in my new kill zone, I found myself overlooking some open spots that might provide a long range shot well outside a crossbow's trajectory.  Upon making this discovery, I dusted off my old Moisan Nagant rifle. It fires 7.62X54r (roughly a beefy .308).  A well placed Nagant round will drop a deer of any size like a lightning bolt. The movie, ‘Enemy at Gates’ showcases the rifle in the hands of Russian sniper Vassili Zaitsev at the siege of Stalingrad; it further popularized the Nagant among collectors and hunters alike.

I use the original iron sights on my Finnish model Nagant rather than a scope; the maximum range I might need to shoot here in Low Country, while beyond the effective trajectory of a crossbow, is not that far even in my newly chosen spot. The flat wooded Southeast coastline does not readily offer hunters many places for long range shots unless they invade a logging clear-cut. I took the Nagant to the range to check the sights and make sure everything lined up.  A few initial test shots showed the windage off a bit, so I asked the range attendant for a hammer. She looked at me dubiously, but after a couple of light taps on the front site post corrected the trouble, she perhaps gained an appreciation for field-expedite adjustments on legacy military rifles. With the rear sight set low at the shortest range I was well within the inner two target circles at over 50 yards. I was ready to hunt having attained a tight shot-group after the crude adjustment. The Nagant shoots flat at least to 100 yards.

With little hope of getting a mature buck this late in the season, I was thrilled when I saw a large doe jump the fence from a neighbor’s property (where they are off-limits) onto a close friend’s piece of land where they are fair game. The ensuing challenge was twofold; the angle of the shot I would need to take from my precarious perch would have been challenging even for a young limber hunter and arthritis hampered me from effectuating the needed contortions to align the iron sights on the Nagant without risking falling from the tree stand.

I was briefly tempted to be envious of those old pop-culture cucks who compromise their souls in unholy alliance with yoga demons to gain that extra bit of geriatric limber that I was sorely needing, but then I considered what I would look like writhing on a mat in a spandex body-condom and my vanity squelched any further thoughts on metrosexual fads imported and franchised from the East. Upon further and painful reflection, I pictured huge cargo ships loaded with Chinese containers, a common sight on the Savannah River heading to port, and considered that much of what is imported from the East comes at significant cost as manifested by this past election in Georgia which was blatantly offered on a platter made in China to the local communists by a pliable, buyable, neocon governor, who, in a less pusillanimous age, would have been recalled--if not bullwhipped.

As misfortune would have it, my best shot at the wandering doe was not good enough; I missed, and she leapt back over the fence. While she did not leave the range of my Nagant by any stretch, she did go back onto that neighbor’s property where she was out of bounds and from there she stared at me mockingly with her erect ears jiggling and tempting my trigger finger to commit a trespassing crime although arguably not one worse than yoga contortions, wearing spandex, voting for Brian Kemp or buying Chinese-made gewgaws.

Long lost into no-trespassing land, my elusive doe must have alerted her breakfast club of my presence, because the rest of that final week of deer season brought no prey in my sights. Undaunted, I was still hopeful about putting some extra wild game on the table and I turned my attention to a pond behind the deer stand where geese and ducks gather.

There is a short season in Georgia allowing the hunting of geese, and while sitting in that deer stand shivering those last few mornings, I heard a V-shaped formation honking overhead and landing on a nearby pond. My next sporting endeavor, although somewhat anticlimactic, was calling to me, nonetheless.

I grew up on a lake in rural Massachusetts where ubiquitous protected geese defiled beaches, floating docks, lawns and even boats. I am told that golf courses suffered similarly, although I would not know firsthand as I never gained the good graces of any amiable grounds-keeper in order to be allowed to hunt game birds on any greens off-hours; I am among those who would only ever pick up a golf club in self-defense or perhaps to beat a goose to death – only during the appropriate season of course.

I had a Labrador Retriever in my youth that almost died when he swam out after a gaggle of geese; they nailed him good. Unlike his insatiable appetite for porcupines which eventually did kill him, after that, he never swam out to get geese again. One might think that he would have also learned about the hazards of porcupines, but no. He instead learned that when covered with quills after each porcupine encounter, he should go to the car in anticipation of a ride to see the vet to have them removed. That got expensive fast as he had to be anesthetized each time. He may have actually been a drug addict using porcupines as his preferred narcotic delivery mechanism.