Argentina Smolders, and the PRC Fuels the Fire by Russell Gordon,

Argentina is undergoing one of its recurring increases in violent crime and social implosion, by some accounts worse than those of the crises-plagued 90's. Poverty estimates are around 40%, and shantytowns, called "villas of misery," are undergoing rapid expansion. Industry has collapsed decades-long ago, and the jobless youth often join the large and violent criminal element.

La Nacion, in its program "Hambre de futuro" (Hunger for the future) interviewed impoverished but land-holding peasants -- possessing natural agricultural materials such as manures, seeds and organic plant matter--while leaving their lands uncultivated and their many children hungry.  Some poor are first poor in culture. 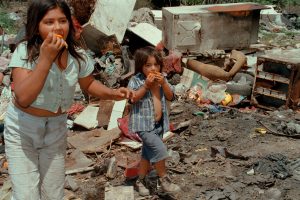 Two children eat rotten organges in the shanty town slum (called a 'villa'). Their parents collect trash to find food, and cardboard to sell to recyclers, in order to survive. Unemployment and economic collapse increased significantly in 10 years of Menem's rule.

Moreso, in a largely rural and agrarian-pastoral country, commercial corruption impedes the nation from achieving it's real potential as an agro-commodity exporter, by impeding agricultural products from accessing local and international markets to protect local turf rackets.

Despite this dismal state, Argentina still claims, and threatens to use force, to conquer the Falkland Islands, as they tried in 1982. And the People's Republic of China (PRC) is stoking the flames in the South Atlantic.

"The Malvinas were, are, and will be Argentine ... There is no doubt about the right that we have over those lands", President Alberto Fernandez told Telesur."We are going to fight until the Malvinas Islands are ours again... It is Argentina seeking to recover a territory that was stolen from us," Fernandez stressed, adding that his administration will continue to work diplomatically to "convince the world that the Malvinas are Argentine.""

TRTWorld reported: "China has announced its support for Argentina's territorial claims over the British-run Falkland Islands as it welcomed the South American country into its global Belt and Road Initiative following a meeting of presidents Xi Jinping and Alberto Fernandez in Beijing....The statement backed each other's territorial claims –– the Falkland Islands for Argentina and China's over Taiwan...Argentina reaffirmed its commitment to the one-China principle; China reaffirmed its support for Argentina's demand to fully exercise sovereignty on the Malvinas Islands, and for the resumption of negotiations to resolve the disputes through peaceful means in accordance with relevant resolutions of the United Nations," state-affiliated CGTN reported, citing the joint-statement."

Renowned grand strategist Gregory R. Copley wrote:  "[I]t is known that PRC officials have urged Argentine officials to pursue their claims to the Falklands and, it must be presumed, to be prepared for an opportunity once again to project military power out to the islands. Significantly, the Obama Administration told the previous (conservative) President of Argentina, when he came into office, that he should pursue such claims. That president rejected Obama's anti-UK suggestion, saying he had more important things to attend to, but the new Peronista administration is already beholden to the PRC.."

The PRC's investment is substantial, at $23.7 billion. It is also possible that the PRC is assisting the Argentine military in weapons modernization plans to win a future air-amphibious assault war. It is further possible that the PRC is trying to turn the heat up in the South Atlantic to draw away British forces from the Asia-Pacific, Copley noted.

Argentina is a large country with immense unpopulated open spaces in the Pampas grasslands, and Patagonia. Though much of the land in these regions is arable, it remains underdeveloped agriculturally. Why then would Argentina want ever more territory when it does so poorly with what it already possesses?

The problem of Argentina's aggressive aims towards the Falklands is cultural in origin. An estimated 90% of all Argentines want to take control of the Falklands irrespective of what its native British inhabitants wish. On the pretext that the Falklands are still on Argentina's continental shelf at 400 miles away, Argentine children are indoctrinated at an early age in a sense of national victimology centered around conquering the Falklands. This would be like American schoolchildren being raised to believe the Bahamas should be a US territory because it is near the US, and hoping one day to invade it.

Some more moderate Argentines realize the futility of claims to the South Atlantic islands. One joke that circulated in Buenos Aires in the 90's told about what will happen to the Falklands after Argentina captures them. First, litter appears in the streets. Then the ashtrays and towels disappear from the hotels. The first rapes, kidnappings and murders occur. Then shantytowns appear on the outskirts of Stanley. Victory at last.

The Organization for World Peace reported: "U.K. Foreign Secretary Liz Truss tweeting that the U.K. “completely reject[s] any questions over sovereignty of the Falklands,” which are are “part of the British family and we will defend their right to self-determination,” " ...For many across the world and especially in the U.K., the question of the Falkland Islands has already been conclusively settled.

The islands have been held in contention since Argentina gained its independence in the Argentine War for Independence (1810-1818), inheriting a dispute from Spain over the islands. Spanish and British settlers had exchanged control of the islands until 1833, when two British ships firmly established British rule. After centuries of disagreement, Argentina and the U.K. fought a two-month war over the islands in 1982 where the British decisively repulsed an Argentinian invasion. Additionally, the people of the Falklands have consistently and overwhelmingly voiced their support for remaining with the U.K., with a 2013 referendum returning a grand total of 3 votes in favor of severing ties with the U.K., while 1513 of 1650 registered voters voted to remain with the U.K.."

"After China’s entry into the conflict, the Kelpers demanded respect for their ‘human rights’ and their ‘self-determination’," said a statement from by the Falklands Legislative Assembly. "..the President of the Legislative Assembly, MLA Teslyn Barkman, said: “We had already anticipated that we would see a growing rhetoric about the sovereignty of the Falkland Islands in 2022, given that it is the 40th anniversary of our liberation." The President of the Assembly "..ask[ed] that they be “left alone to live our lives and develop our country as we see fit on behalf of current and future generations.""

"Falkland Islands Government and the people of the Falklands have been, and continue to be, subjected to attacks and attempts by Argentina to diminish our human rights and frustrate our economy," MLA Pete Biggs wrote. "Unfortunately, the government of Argentina have outlined ambitions to colonise our free islands even after their traumatising invasion failed in 1982.  Forty years on they maintain a threatening attitude towards the Falklands people. It is disheartening to see them make financial pacts and lobby  other countries, like China, to align with their inhumane and aggressive stance."

Several Latin American countries, out of anti-colonial sentiments support Argentina's claims, including Brazil, Uruguay and Chile, ironic as much of Latin America was colonized by Europeans, and many Latin nations' indigenous populations are marginalized and impoverished.

Perhaps it is time for governments and world bodies to re-think the meaning of the anti-colonial movement, and take self-determination into greater account.

Russell Gordon is a long-time journalist and photographer who worked in Argentina.  His photograph accompanying the article was published in La Nacion, Argentina's most distinguished newspaper.